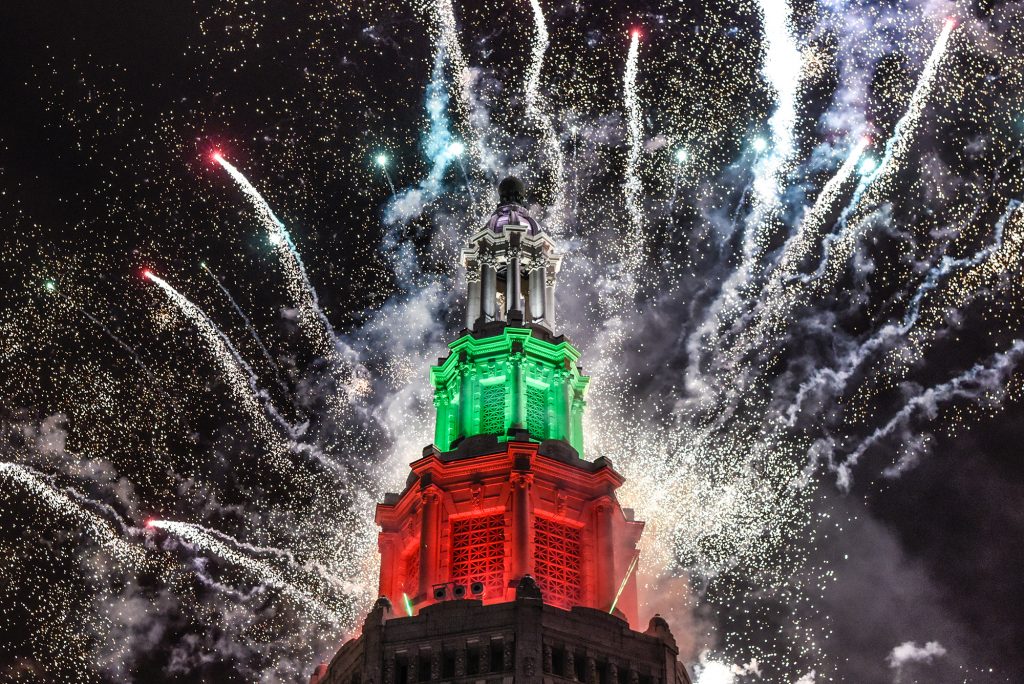 This year will mark the 31st anniversary of the Downtown New Year’s Eve “Buffalo Ball Drop and Fireworks” event, to benefit the Police Athletic League (PAL) of Buffalo. Today, Mayor Byron W. Brown invited city residents and visitors to ring in 2019 at the Buffalo Ball Drop at Iskalo Development’s Electric Tower, located in Downtown Buffalo’s Roosevelt Plaza at the intersection of Huron, Genesee, and Washington Streets.

“Now in its 31st year, the Buffalo Ball Drop and Fireworks event has become an annual New Year’s Eve tradition that keeps getting bigger and better and all of downtown is ready to celebrate the best New Year’s Eve yet,” said Mayor Brown, reminding residents and visitors that the Ball Drop is a benefit for the Police Athletic League (PAL) of Buffalo. “As PAL Chair, I recognize the importance of PAL to our city and I encourage New Year’s Eve revelers to continue to support this valuable organization which provides recreational, educational, cultural and other opportunities to our youth. I also thank our exceptional sponsor organizations for their continued dedication to the annual Ball Drop. Their commitment to our youth and to our city fill us with a great sense of pride as we work together to reimagine the city we love and the neighborhoods we cherish.”

The Buffalo Ball Drop and Fireworks event is presented by Mayor Brown and the City of Buffalo, the Police Athletic League (PAL) of Buffalo and Buffalo Place, with major sponsors which include M&T Bank, the Western New York Chevy Dealers, Ideal You Weight Loss Center, the City of Buffalo, Buffalo Place, WKBW, and 97 Rock. The Ball Drop benefits youth who participate in the PAL programming.

PAL Executive Director Nekia Kemp said, “As we welcome the New Year, the Police Athletic League of Buffalo is incredibly grateful for the support of Mayor Brown and the City of Good Neighbors. This annual New Year’s Eve event supports Buffalo PAL’s youth programs all year long. As a result, we are able to fulfill our mission of improving the immediate and future quality of life for our youth through enrichment and recreational programming in collaboration with law enforcement; and the generous support from our sponsors of this year New Year’s Eve Ball Drop Celebration. For more information on Buffalo PAL programs please visit Buffalopal.com.”

“On behalf of the Board of Directors of Buffalo Place Inc., we thank our partners at the City of Buffalo including Mayor Brown, Police Athletic League, as well as WKBW-TV, 97 Rock, and Iskalo Development, for their partnership in the successful production of the 31st Annual Buffalo Ball Drop,” said Michael T. Schmand, Executive Director of Buffalo Place Inc. “This signature annual event, presented by M&T Bank, is a festive celebration of the new year and continued growth of Downtown. We also thank our sponsor family, whose investment benefits the youth that enjoy
PAL programming. We look forward to another joyous celebration in the heart of Downtown Buffalo.”

“Major community events like the Buffalo Ball Drop and Fireworks have a big positive economic impact in the downtown area. As a company with a 162-year history in Buffalo, we’re honored to ring in the New Year by sponsoring a community celebration that’s good for downtown businesses and also supports the Buffalo PAL and its many youth programs,” said C. Michael Zabel, M&T Bank Group Vice President, Corporate Communications.

Once again, the New Year’s ball will descend from atop Iskalo Development’s historic Electric Tower, located in the heart of Buffalo’s Theatre District.

“Iskalo Development is excited to host another spectacular New Year’s Eve Ball Drop event at the Electric Tower,” stated Founder and CEO of Iskalo Development Paul B. Iskalo. “Each year we look forward to welcoming fellow Western New Yorkers to Downtown’s Electric District to celebrate our great city and ring in the New Year.”

In celebration of its 31st anniversary, the Buffalo Ball Drop will feature performances by Tommy Z and the All Star Band. Tommy Z is a contemporary blues guitarist/singer/songwriter/producer who has been described as a “blues treasure” by legendary 97 Rock/WBFO DJ Jim Santella (WBFO), and “one of WNY’s best kept secrets” by Sarah French, Blues Matters Magazine. He has been recognized with numerous awards over the years, including being voted Top Blues Vocalist in Western New York, Top Blues Guitarist, his groups have won the Top Blues/Crossover Blues Band categories, and was honored with the Muddy Waters Award for “Artist of the Year” by the Blues Society of WNY in 2004. In 2007, Tommy was inducted into the Buffalo Music Hall of Fame, recognizing him alongside some of the best talent to ever come out of WNY.

Will Holton, a smooth and savvy saxophonist with an international reputation on the jazz scene, will also be back by popular demand. The show kicks off at 10:00 p.m. and concludes with the Buffalo Ball Drop and Fireworks at midnight.

Live coverage of the “Buffalo Ball Drop & Fireworks” will begin with “Eyewitness News at 11pm, followed by the television special “Countdown to 2019” that will be done in synch with “Dick Clark’s New Year’s Rockin’ Eve with Ryan Seacrest 2019” on ABC-TV. The presentation of the “Countdown to 2019” HD telecast will be presented by WKBW Channel 7, a co-sponsor of the Ball Drop events since the first one in 1988 – when 97 Rock offered it as a gift to the city of Buffalo. D.J. Jickster from 97 Rock will co-host the event with The Eyewitness News Team of Anchors Keith Radford and Ashley Rowe, with Meteorologist Andy Parker. Skylighters of WNY will shoot the fireworks show and choreograph it to classic rock and seasonal music favorites.

Michael Nurse, WKBW-TV VP and General Manager, stated, “We are proud to again be part of this incredible event on air and on-site. This event is an amazing way to start the New Year and part of the fabric of Western New York.”

In an effort to provide reliable rides to and from the Buffalo Ball Drop, Uber is on board this year to help holiday revelers get to and from the event easier than ever. Free parking is available at nearby Buffalo Civic Auto Ramps – Main Place Mall and Fernbach Ramps – courtesy of Mayor Byron W. Brown, The Buffalo Board of Parking and Buffalo Civic Auto Ramps. For directions to ramps, go to bcarparking.com. All Metro Bus and rail schedules can be found at http://metro.nfta.com/.