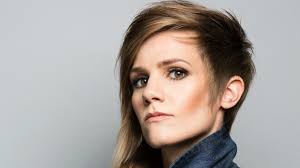 Cameron Espositois a Los Angeles-based standup comic, actor and writer. In addition to her work as a nationally touring headliner, Cameron has appeared on NBC, CBS, Comedy Central, TBS, IFC, E!, Cartoon Network and HBO Canada. Cameron also hosts her own podcast QUEERY – an hour long conversations with some of the brightest luminaries in the LGBTQ+ family. She has appeared in films featured at the Sundance and SXSW Film Festivals.