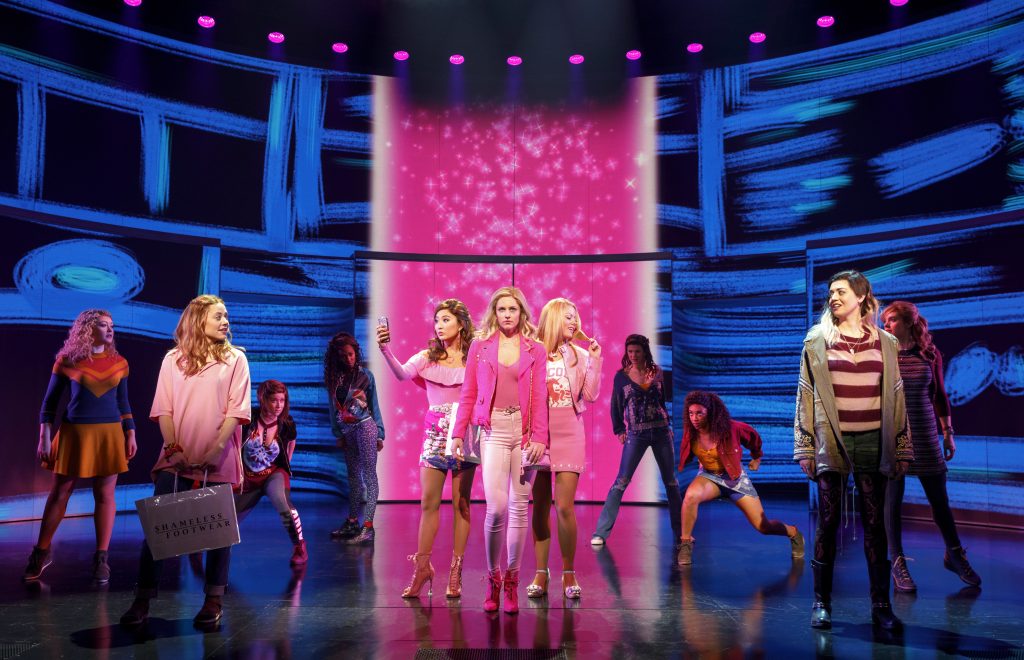 Special Engagements in the 2019-20 series include Jersey Boys, Les Misérables, and Rudolph the Red-Nosed Reindeer: The Musical. “Thanks to our board, volunteers, donors, staff, and the people of Western New York, Shea’s remains the jewel in the crown of the Queen City,” said Murphy. “We’re dedicated to providing our community an unforgettable experience every time they walk into this beautiful theatre, and the upcoming Broadway series exemplifies that commitment.”

“We are grateful for the community’s enthusiastic support, which has helped make Buffalo a leader of the touring Broadway industry,” added Nocciolino. “We’re launching a fourth national tour from Shea’s with Mean Girls. We added a seventh show to our Broadway Series. We’ve become a favorite destination of touring productions. We should take pride in this reputation.”

Mean Girls: September 21-28, 2019
Featuring a book by Tina Fey, Mean Girls tells the story of a naïve newbie who falls prey to a trio of lionized frenemies. Entertainment Weekly calls it “A MARVEL: dazzling and hilarious!” and USA Today says, “We’ll let you in on a little secret, because we’re such good friends: GET YOUR TICKETS NOW!”

Come from Away: October 15-20, 2019
On 9/11, the world stopped. On 9/12, their stories moved us all. This New York Times Critics’ Pick takes you into the heart of the remarkable true story of 7,000 stranded passengers and the small town in Newfoundland that welcomed them. Cultures clashed and nerves ran high, but uneasiness turned into trust, music soared into the night, and gratitude grew into enduring friendships.

Jesus Christ Superstar – 50th Anniversary Tour: February 11-16, 2020
An iconic musical phenomenon celebrating its 50th anniversary with a mesmerizing new production, Jesus Christ Superstar is set against the backdrop of an extraordinary series of events during the final weeks in the life of Jesus Christ, as seen through the eyes of Judas. Reflecting the rock roots that defined a generation, the legendary score includes ‘I Don’t Know How to Love Him’, ‘Gethsemane’ and ‘Superstar’.

The Band’s Visit: April 14-19, 2020
Winner of 10 Tony Awards in 2018 including Best Musical, The Band’s Visit celebrates the deeply human ways music, longing and laughter can connect us all. After a mix-up at the border, an Egyptian Police Band is sent to a remote village in the middle of the Israeli desert. With no bus until morning and no hotel in sight, these unlikely travelers are taken in by the locals. Under the spell of the desert sky, their lives become intertwined in the most unexpected ways.

Anastasia: May 5-10, 2020
From the Tony Award®-winning creators of the Broadway classic Ragtime, Anastasia transports us from the twilight of the Russian Empire to the euphoria of Paris in the 1920s, as a brave young woman sets out to discover the mystery of her past. Pursued by a ruthless Soviet officer determined to silence her, Anya enlists the aid of a dashing conman and a lovable ex-aristocrat. Together, they embark on an epic adventure to help her find home, love, and family.

Jimmy Buffett’s Escape to Margaritaville: June 2-7, 2020
A musical comedy featuring both original songs and your most-loved Jimmy Buffett classics like “Fins,” “Volcano,” and “Cheeseburger in Paradise”, Escape to Margaritaville is a show USA Today calls “A little slice of paradise!” Similarly, Entertainment Weekly raves, “It will knock your flip-flops off!”— so don’t let the party start without you.

Jersey Boys: November 14-17, 2019
They were just four guys from Jersey, until they sang their very first note. They had a sound nobody had ever heard… and the radio just couldn’t get enough of. But while their harmonies were perfect on stage, off stage it was a very different story — a story that has made them an international sensation all over again. Go behind the music and inside the story of Frankie Valli and The Four Seasons in the Tony and Grammy Award®-winning true-life musical phenomenon, Jersey Boys.

Les Misérables: December 10-15, 2019
Cameron Mackintosh presents the new production of Alain Boublil and Claude-Michel Schönberg’s Tony Award-winning musical phenomenon, Les Misérables, direct from its acclaimed Broadway return. Featuring the beloved songs “I Dreamed A Dream,” “On My Own,” “Stars,” “Bring Him Home,” “One Day More,” and many more, this epic and uplifting story has become one of the most celebrated musicals in theatrical history. With its glorious new staging and dazzlingly reimagined scenery inspired by the paintings of Victor Hugo, this breathtaking new production has left both audiences and critics awestruck.

About Shea’s Buffalo Theatre: Shea’s Buffalo Theatre, the historic crown jewel of Shea’s Performing Arts Center, opened in 1926 under the moniker of “The Wonder Theatre” and was the dream of Michael Shea. Originally serving as a movie house under Paramount Pictures with “an acre of seats,” it would later stage vaudeville shows and play host to the likes of the Marx Brothers, Frank Sinatra, George Burns, Bob Hope and more in the 1930s. Later in the 1970s, to save the theatre from demolition, a group of concerned people formed The Friends of Buffalo Theatre. This not-for-profit organization worked to bring about a preliminary restoration and was responsible for getting Shea’s listed on the National Register for Historic Places. Over the past 20 years, there has been over $30 million in restoration completed, all by volunteers, which allows Buffalo to keep the only surviving Tiffany-designed theatre in magnificent condition for
our patrons and the community.

The M&T Bank 2019-20 Broadway Series is presented by Shea’s Performing Arts Center and Albert Nocciolino, and is sponsored locally by M&T Bank, The Buffalo News, and WKBW-TV.