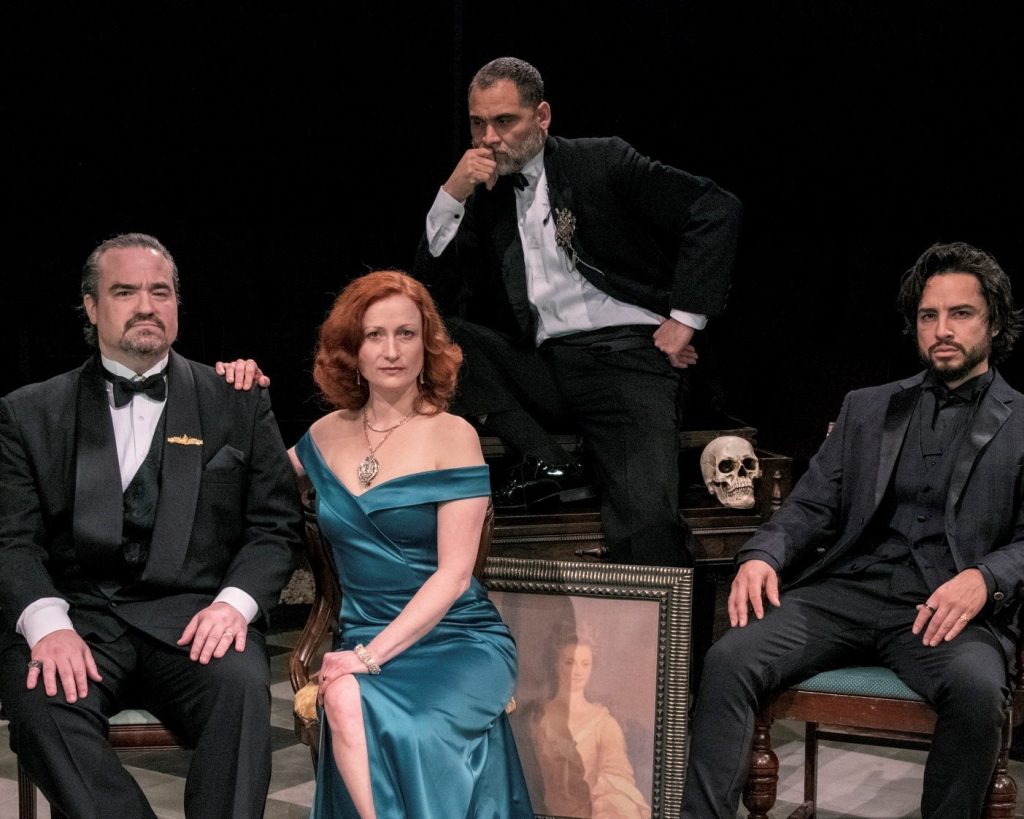 The Irish Classical Theatre Company is proud to present, as the Fifth production of its 2018-2019 Season, the quintessential Shakespearean tragedy HAMLET.  HAMLET will be presented Friday, April 26th through Sunday, May 19, 2019.

One of the most iconic tales of the classical canon is told as the world of Shakespeare returns to ICTC’s Andrews Theatre for the first time in nearly 20 years.  In this slick, innovative and dynamic production, Kate LoConti Alcocer directs a stellar cast as they breathe new life into this timeless story of loyalty, honor, friendship and betrayal. Charged by the ghost of his father to avenge his heinous murder, Hamlet, the young prince of Denmark is driven to the brink of madness. HAMLET is directed by ICTC Guest Director Kate LoConti Alcocer in her ICTC directorial debut.  Kate has played 14 leading roles at ICTC in 15 years, notably After Miss Julie (Katharine Cornell Award for Visiting Artist); and Outside Mullingar (ARTIE Award, Outstanding Actress in a Play).  She also received ARTIE nominations for Private Lives; The Winslow Boy; and The Constant Wife.  Kate, who holds a BFA from Columbia University, will join the Staff of the Irish Classical Theatre Company next Season as Associate Artistic Director.

HAMLET stars Anthony Alcocer in the title role, along with ICTC favorites Matt Witten as Claudius; Kristen Tripp Kelley as Gertrude; and Chris Kellly as Polonius.  Rounding out this stellar cast are Anna Krempholtz as Ophelia; Adam Yellen as Horatio; Rolando Martin Gomez as the elder Hamlet’s Ghost; Patrick Cameron as Laertes; Jake Hayes as Marcellus and Peter S. Raimondo as Barnardo.

“From the entire spectrum of dramatic literature, HAMLET is my favorite play; so why it has taken 30 years for ICTC to produce it is a mystery best left to the Gods,” said ICTC Artistic Director Vincent O’Neill.  “In ICTC’s Season of ‘Power, Sex and Politics,’ HAMLET, lauded for centuries as the greatest play ever written, could simply not be overlooked,” he continued.  “By its very nature, HAMLET is both timeless and universal, and, in the capable hands of Director Kate LoConti Alcocer, this production will be intense, bold, fresh and exciting – a powder keg of unbridled passions – in the intimate confines ICTC’s Andrews Theatre,” O’Neil concluded.

Performances will take place at The Andrews Theatre, home of the Irish Classical Theatre Company, 625 Main Street, Buffalo, Friday April 26 through Sunday, May 19, 2019.  The first Saturday matinee of the run, Saturday, April 27, is Pay-As-You-Can.  Information and tickets are available by phone at 853-ICTC (4282) or online at irishclassicaltheatre.com.