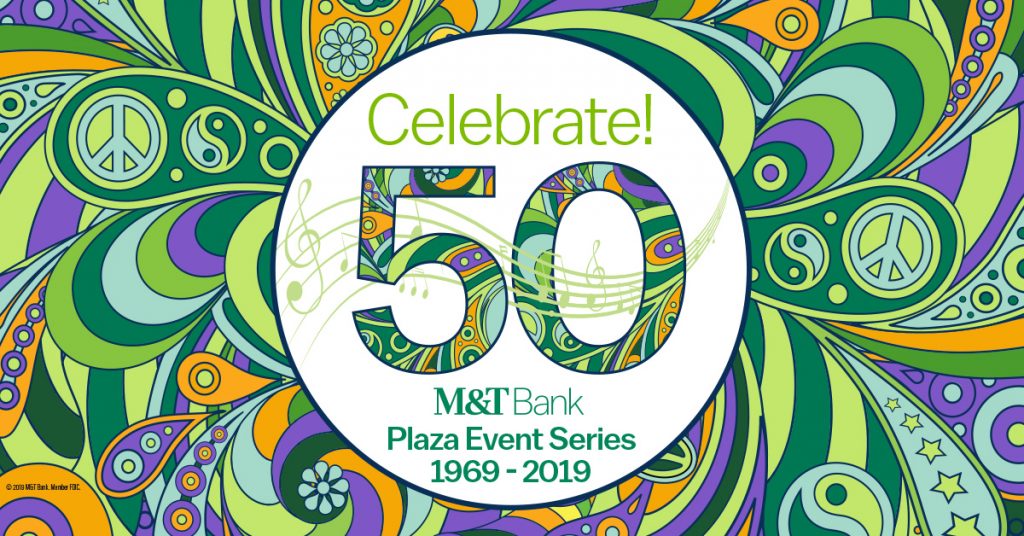 In 1969, just two years after One M&T Plaza opened, the first Plaza Event Series performance was held, a historic moment that fulfilled famed architect Minoru Yamasaki’s plans for an open plaza surrounding the building becoming a gathering place for people who worked and lived in the city’s central business district.

This year, M&T Bank celebrates the 50th season of the Plaza Event Series, which is believed to be the longest running free concert series of its kind in the United States. The 11-week series starts June 10 at noon.

“Our plaza is a symbolic manifestation of the bank’s role in the community—joining, strengthening and enriching the central business district for visitors and residents alike,” said Rich Gold, M&T Bank President and COO. “However, strengthening a city doesn’t happen through building projects alone; it also takes experiences and events that bring the community together and cultivate connections. The Plaza Event Series has done exactly that throughout its 50 years, becoming part of the fabric of the downtown community.”

To build on the Plaza Event Series’ legacy, M&T Bank will be launching a used musical instrument drive to benefit local students. Instruments collected will go to Buffalo Public Schools for use by students who don’t have access to their own musical instrument. “The Plaza Event Series is an inspiring experience. It brings our community together to celebrate local music and the arts—and with the community’s support, we have the opportunity to convert the inspiration into action,” said Shelley Drake, M&T Bank Regional President for Western New York. “This drive will give new life to instruments stowed away in attics and garages by putting them into the hands of local students who want to learn a new instrument or take their talents to the next level. And who knows – maybe the Plaza Event Series headliner, 10 or 20 years from now, will be a local student who received an instrument through our musical instrument drive.”

Those interested in donating an instrument can stop by the Plaza Event Series during the first week of performances or visit M&T’s branch on the ground floor of One M&T Plaza during regular business hours throughout the duration of the series, which runs June 10 through August 23. M&T has also debuted a Spotify playlist that includes songs of the summer from the last 50 years, as selected by the M&T employees who organized this year’s series. It expands the community-building impact of the Plaza Event Series into the digital space, allowing Spotify users to connect with the series wherever they are. To listen to the Spotify playlist, visit https://open.spotify.com/playlist/5gfHexU2lAyLyROqext8bI.

On social media, M&T is asking concert goers to share their stories with the hashtag #PlazaEventSeries. Memories and photos of past series as well as selfies and pictures of this year’s concerts are all welcome and encouraged. Organizers are hoping to crowdsource audience experiences to preserve a well-rounded history of the series.

For the kickoff event June 10, a special celebration is planned. Bank executives, employees and customers will join community members and local elected officials for a brief ceremony followed by the day’s performance, which will feature songs from throughout the last five decades.

A full listing of 2019 performances is below: