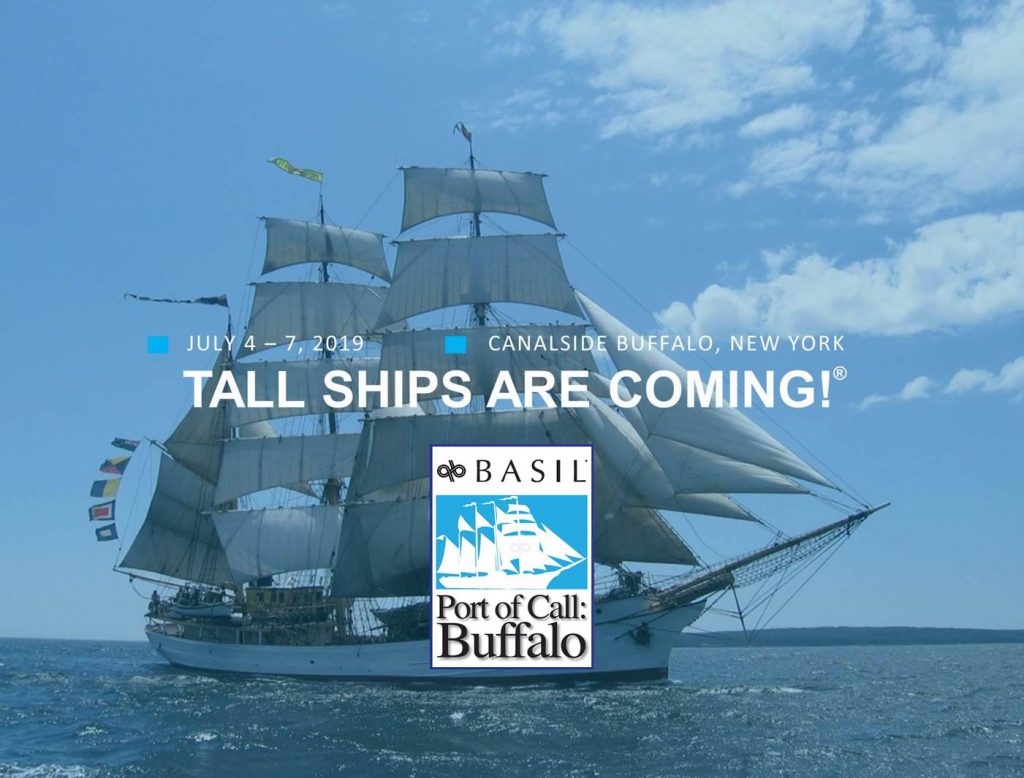 A fleet of 12 historic and majestic tall ships from harbors across the United States, Canada, Spain, and the South Pacific will grace Canalside, Riverwalk and Erie Basin Marina for Buffalo’s inauguration as a host port of the Tall Ships Challenge® Great Lakes 2019 race from Toronto to Buffalo. With the arrival of the tall ships, Basil Port of Call: Buffalo, a four-day, family-friendly celebration of the city’s maritime heritage, will take place along the Downtown waterfront on July 4-7.  Offering a unique opportunity for adults and children to view, board and explore the vessels, festivities will feature family activities, live entertainment, historic exhibits, food and beverages, and a Parade of Sail, presented by One NiagaraÒ, of the tall ship fleet on July 4th.

The ships will muster in Lake Erie at 2p for the Parade of Sail, and at 3p move under full sail past the landmark 1833 Buffalo Lighthouse, arriving by 5p at their docking stations in Canalside, Riverwalk, and Erie Basin.  Cannons will punctuate the air in salute along with bagpipers from the Erie County Sheriff’s Irish Pipes and Drums reserve unit and join the 80 musicians in The Buffalo Niagara Concert Band. To serve the anticipated crowds, Kim Reynolds, POCB Transportation Chair, worked closely with the NFTA, Go Buffalo Niagara, and the Greater Buffalo Niagara Regional Transportation Council, to develop a comprehensive transportation plan to make the four-day event easily accessible.  Festival-goers are advised to use the NFTA-Metro Park & Ride options offered at more than 20 locations across WNY including Lasalle Station at 3030 Main St., and University Station at 3435 Main St.  In addition, nearly 14,000 parking spots have been identified along the Metro Rail Main St. spine that are within a one block walk of a Metro Rail station.  Limited paid parking will also be available in the lots at Waterfront Village, 50 Lakefront Blvd. To tour any or all of the tall ships, Passport Vouchers can be purchased at all participating Wegmans locations throughout WNY and online at www.TallShipsBuffalo.org.