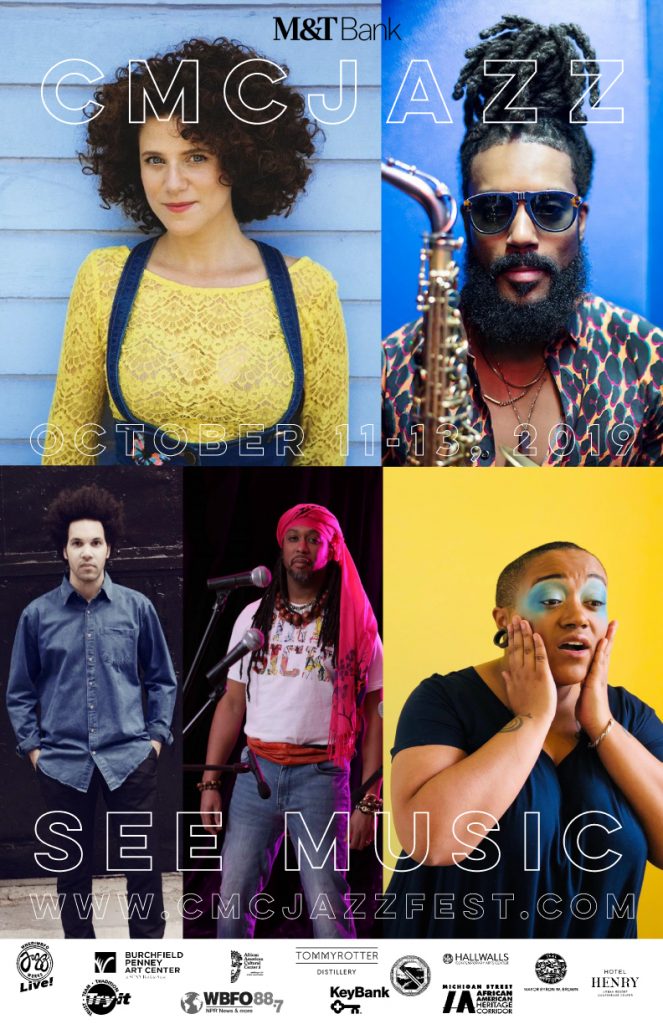 The three (3) day Colored Musicians Club International Jazz Festival Presented by M&T Bank will take place Friday, October 11th through Sunday, October 13th, 2019. A full schedule of events and tickets are available at www.cmcjazzfest.com. In addition to its Presenting Sponsor M&T Bank, the Club is pleased to announce that WNED| WBFO is its Official Media Sponsor. WNED | WBFO’s JazzWorks Live! recently premiered its new stage and set in the WNED studios. The concert space was a near-perfect replica of the interior of the Historic Colored Musicians Club. Tommyrotter Distillery and The Mansion on Delaware Avenue are also new to the Festival’s roster of top sponsors. Joining in the celebration are special guests from the preservation, arts and cultural community who are partnered with the Club as well as host of public officials and private partners for an Official Press Conference.

The festival has been moved to the fall season to better highlight the festival’s elite level of jazz musicianship and artistry which sets it apart from outdoor offerings found on area stages throughout the summer months.

Cyrille Aimée is headlining the festival with a quartet on Sunday, October 13th, 2019. Aimée will also host a master class at the CMC Jazz Museum. She’s a pioneer in the industry, as well as an unparalleled vocal performer. Be prepared for a global experience in English, French, and maybe even Spanish, as she resides in New Orleans, hails an education at SUNY Purchase in New York, and touts French-Dominican parentage.

Guest visionary, woodwind artist, educator Blue Note/ Revive artist, saxophonist Brent Birckhead is slated to bring his ensemble entitled BIRCKHEAD as a headliner on Sunday, October 13th, 2019 at 2:30 pm. No strangers to the international stage, the group wowed audiences at the Kennedy Center, and continues to engage listeners with the bandleader’s “compulsion for creative risk and deep respect for legacy.”

Festival highlights also include the CMC, Burchfield Penney Art Center and Hallwalls Contemporary Art Center in a collaborative musical celebration in honor of the late great Reynold Scott. The all-star ensemble will play some of Rey’s original tunes, reimagined. The curated show will feature Brent Birckhead on woodwinds, and French string composer/ improviser, Scott Tixier on violin. Artistic Director and lead pianist, Walter Kemp 3, calls the collective “Reyvolation–outer play-ces” and brings with him the ability to maintain a unique retrospective, while artistically reinventing the music in a way that lends itself to futurism. The unit will perform with a freedom indicative of Scott, and includes Abdul Rahman Qadir on drums, woodwind artist and Hallwalls Artistic Director Steve Baczkowski, bassists Sabu Adeyola and Rishon Odel, vocalist Curtis Lovell, percussionist Ravi Padnamabha, and guitarist Greg Millar.

Renowned bassist and legend Juini Booth, who also toured with Rey Scott and the Sun Ra Arkestra, will be making a featured appearance at the Festival with the George Spanos Trio. Booth has played and recorded with the likes of Art Blakey, Chuck Mangione, Freddie Hubbard and Gary Bartz, and has been a member of the Arkestra since 1989. Joining Lead drummer George Spanos and bassist Booth, is Leo Genovese, who performs globally, noted for his work with Esperanza Spalding.

Saturday evening, The Mansion on Delaware will host a dynamic sitar and drummer duo featuring Naryan Padnamabha and David Teaspoon Hulett. A landmark jam session in honor of Rey Scott will conclude the festival, and will be led by Sabu Adeyola and Don Metz. The unit will feature GRAMMY-award winning pianist George Caldwell and famed drummer Darryl Washington. All those affiliated with Mr. Scott are encouraged to attend.