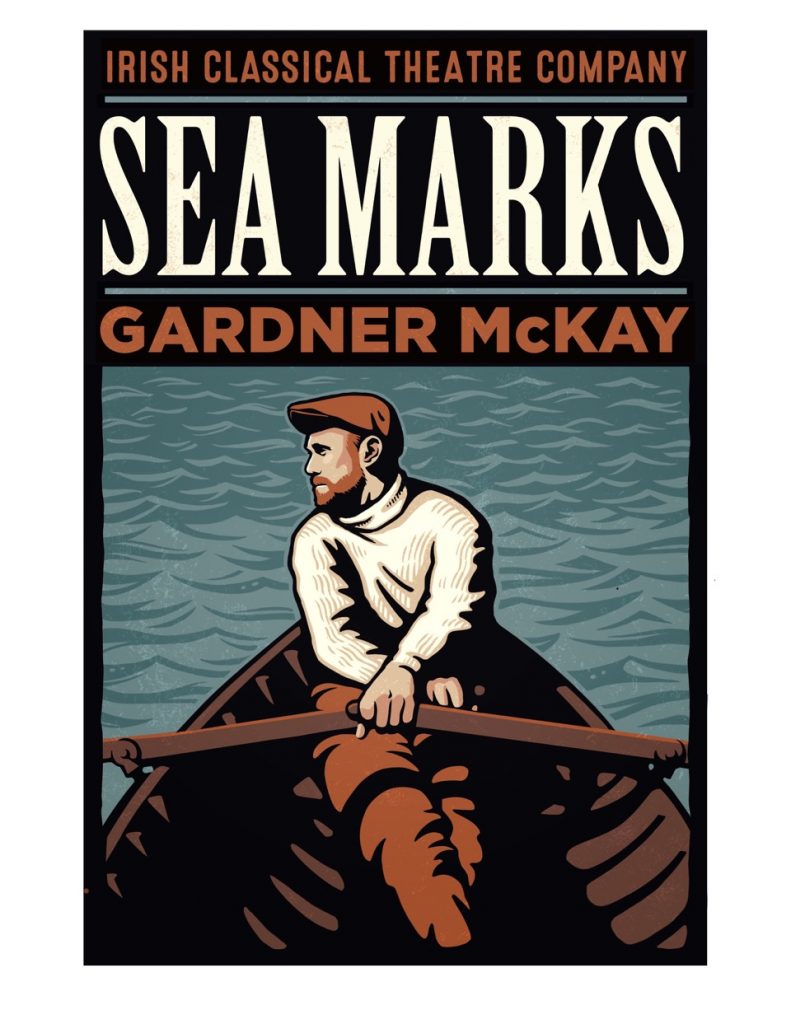 The Irish Classical Theatre Company announced will kick off its 30th Anniversary Season with Sea Marks by Gardner McKay. This lyrical Irish love story, winner of the Los Angeles Drama Critics’ Circle Award (Best Play) and the Canadian National Regional Theatre Award, will be presented virtually.  Tickets will be affordably priced at $15 – $25.

A professionally produced, fully staged performance will be filmed at ICTC’s home, The Andrews Theatre, and will be available for online purchase October 16th to November 1, 2020. Under the leadership of Executive Artistic Director Kate LoConti Alcocer, this will be ICTC’s first ever foray into the world of digital theatre performance.

Living on a remote island West of Galway, Colm, a lonely fisherman, woos a woman he’s glimpsed but once. He courts her by mail, and after a year and a half, romance blossoms, and he arrives in Liverpool. Colm aches to find connection in the arms of Timothea in this strange place she calls home; yet he longs for the sounds of the sea and for the life he has left behind.

The selection of Sea Marks as the Season opener is a tribute to ICTC’s rich history.  It was the first play presented in the Calumet space 27 years ago, directed by Fortunato Pezzimenti and starring Co-Founders Vincent O’Neill and Josephine Hogan.  The extraordinary text of the play is timely, too, as it explores feelings of isolation and loneliness, more poignant and personal now than ever.

Sea Marks, directed by ICTC Associate Director Fortunato Pezzimenti, stars ICTC audience favorites Chris Kelly as Colm and Kristen Tripp Kelley as Timothea. Both are recipients of multiple ARTIE Awards and nominations in multiple categories for productions at ICTC and across Western New York. Notably, Chris and Kristen played opposite one another in ICTC’s regional premiere of The Seedbed by ICTC Playwright in Residence Bryan Delaney and The Beauty Queen of Leenane by Martin McDonagh, displaying dynamic on-stage chemistry.

ICTC is partnering for this online production with award-winning, Buffalo-based Pan-American Film Division.  Travis Carlson will serve as Project Lead and Megan Gonsalves as Project Coordinator.

ICTC’s 30th Anniversary Season marks a transition in Artistic leadership with Kate LoConti Alcocer assuming the role of Executive Artistic Director, with the recent retirement of ICTC’s Vincent O’Neill, who was honored with the title Artistic Director Emeritus.

While a return to live performance remains ICTC’s goal, the safety and comfort of its artists and patrons is of utmost importance.  ICTC will strictly adhere to CDC timelines and guidelines for reopening.  Plans for the rest of the 2020-2021 Season will be announced as soon as we are able to do so reliably, responsibly, and with confidence.

“Since we are currently unable to gather together as we normally would in The Andrews Theatre, we are thrilled to present Sea Marks to ICTC’s patrons in a new and beautiful way,” said Executive Artistic Director Kate LoConti Alcocer.  “Navigating these difficult days demands that we remain nimble in our planning and bold in our choices.  The Irish Classical Theatre Company embraces the challenge of reaching out to our audiences, who long for live theatre experiences, virtually,” she continued. “We embark on ICTC’s 30th Anniversary Season with great enthusiasm and hopeful hearts.  Sea Marks will be seen through fresh eyes and through the camera lens as well,” LoConti Alcocer concluded.

Sea Marks by Gardner McKay will be available for online viewing Friday, October 16 through Sunday, November 1.  Information on obtaining tickets and online viewing will be forthcoming.