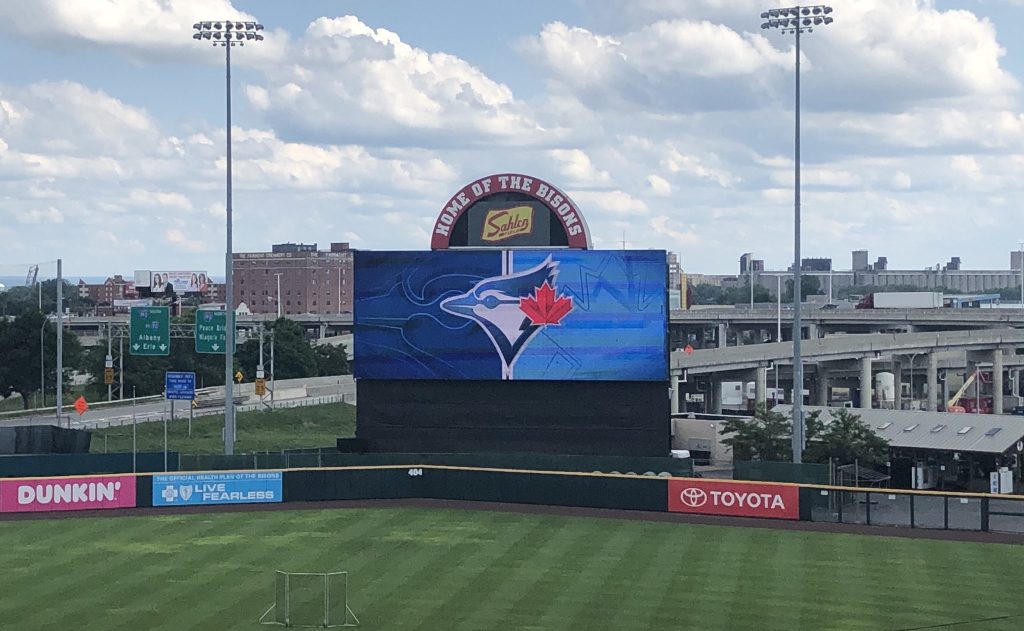 The Toronto Blue Jays are coming to Buffalo!

The exact date of their first game is to be determined with July 31st against the Philadelphia Phillies or August 11th against the Miami Marlins as the two possibilities, based on the ability to get the ballpark ready for the games.

“We are extremely grateful to have a home in Buffalo this season, thanks to the openness, creativity, and partnership of the Buffalo Bisons, Major League Baseball, and Blue Jays staff, who have worked tirelessly to prepare us for games at Sahlen Field,” said Mark Shapiro, President & CEO, Toronto Blue Jays

“The Buffalo Bisons organization is looking forward to doing everything we can to assist the Blue Jays in their pursuit for what will hopefully be at the end of the year a championship season,” said Mike Buczkowski, President or Rich Baseball Operations.

While no fans will be allowed into the ballpark and Sahlen Field, the Consumer’s Put at the Park restaurant and the Box Office will remain closed to the public, Buczkowski sees a great opportunity for not only the Bisons but for Western New York in the Blue Jays coming to town.

“This is a great chance for us to showcase Buffalo… to showcase our community. The amount of responses that we’ve already received from people willing to step in and help to make this the best possible place for the Blue Jays has been overwhelming… but I won’t say that’s surprising because that is what Buffalo is all about,” said Buczkowski.

“This will attract national and international attention to the City of Buffalo and will be great for the hospitality industry in our community. This is just a great day for Buffalo and I congratulate the Bisons and thank the Toronto Blue Jays and MLB for making this decision,” said Buffalo Mayor Byron Brown.

Less than four weeks ago, Buczkowski was at another press conference at the ballpark, but that was to announce the cancellation of the 2020 minor league season. That moment he described as ‘the lowest of the low.’ Today, he characterized this moment as one of the most exciting days ever in Buffalo sports.

“I think of (Bisons owners) Bob and Mindy Rich who have put their heart and soul into Bisons Baseball, whether that was to try to attract a Major League team back in the day or to have the best possible Triple-A ballpark and keep the Bisons a great part of our community,” said Buczkowski.

Buczkowski and the Bisons staff have been in constant communications with the Blue Jays, as Sahlen Field was set to host Toronto’s ‘depth squad,’ the group of players not on the Major League roster that would workout and be ready should roster moves be needed. Today, when the focus shifted, Buczkowski was confident in his team’s ability to get Sahlen Field ready for what was to come. For more information, visit www.bisons.com.