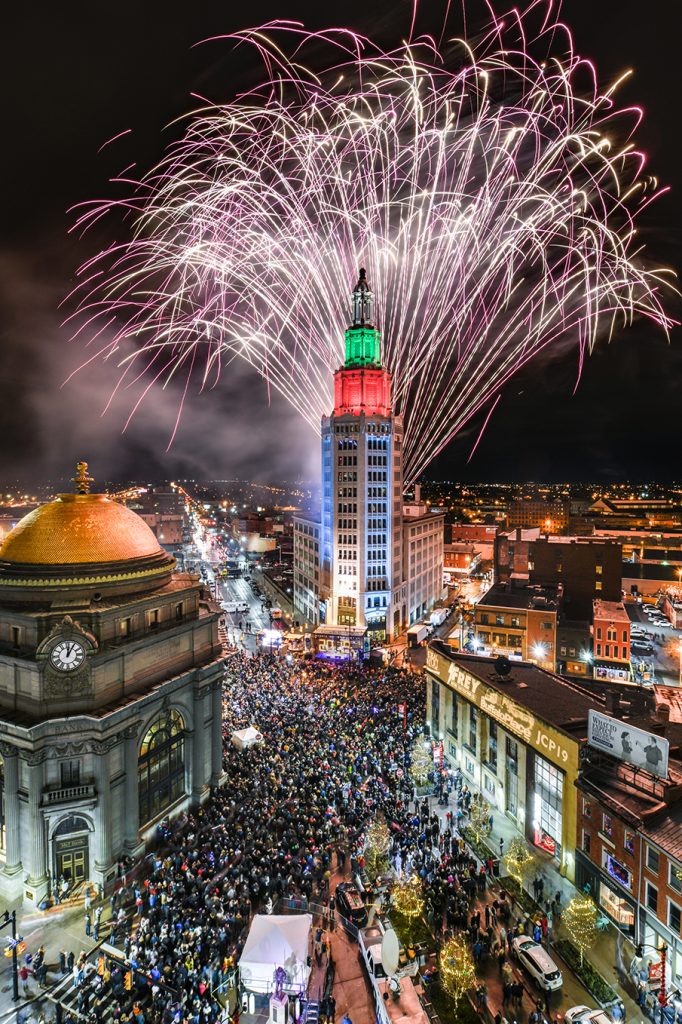 “Holiday traditions are important for families and children, and while we recognize things could change in the weeks to come, we are doing everything we can to prepare at this point for a great and safe New Year’s Eve celebration in Downtown Buffalo on December 31st,” stated Mayor Brown. “In 2021, we overcame many challenges, but we also celebrated many triumphs. Together, we proved that in Buffalo we are a strong, proud, and resilient people who know how to band together when faced with adversity. Let’s stay on this path. As a community, we have a lot to celebrate and on New Year’s Eve, I ask revelers who plan to attend this great outdoor event to work with us by continuing to protect their own health as well as the health of their families.”

Though the “Ball” did drop in 2021 at Roosevelt Plaza, most revelers had to watch virtually as festivities were closed to the general public last year due to the COVID-19 global health pandemic. The 34th annual Buffalo Ball Drop is brought to you by Presenting Sponsor M&T Bank – in partnership with Mayor Byron W. Brown and the City of Buffalo, Buffalo Place, and the Police Athletic League of Buffalo, Inc (PAL).

“As M&T grows and evolves, our focus on our hometown remains as strong as ever,” said Keith Belanger, M&T Bank Senior VP of Corporate Services. “We are deeply committed to Buffalo, and the New Year’s Eve Ball Drop is a chance to celebrate our city with hope, reflection and connection, all which couldn’t be more important as we come to the close of 2021 and ring in 2022.”

Buffalo Place Executive Director Michael T. Schmand stated, “Buffalo Place Inc. and our Board of Directors are pleased to once again partner with Mayor Byron W. Brown, The Police Athletic League of Buffalo, WKBW-TV, and Iskalo Development on the 34th Annual Buffalo Ball Drop. Thanks to our Presenting Sponsor, M&T Bank, this signature New Year’s celebration will be a fantastic kick-off to 2022 in the heart of Downtown Buffalo.”

The NYE Buffalo Ball Drop is an important fundraiser for the Police Athletic League of Buffalo and the annual PAL Giving Campaign; a capital campaign that kicked off during the holiday season with the support of seed funding from The Rotary Club of Buffalo. This year, proceeds will help fund the purchase of a second PAL van. Today, Mayor Brown announced that Scott Bieler, President and CEO of the West Herr Automotive Group, graciously offered to donate $25,000 towards the purchase of the van. The van will be utilized for transporting PAL youth to and from events, as well as delivering quality youth enrichment programs, goods, and services to children and teens from the City of Buffalo and neighboring communities. To learn more about how you can support PAL’s fundraising effort, please visit: buffalopal.com/fundraising.

Nekia Kemp, Executive Director for Police Athletic League of Buffalo, stated, “Buffalo PAL has witnessed tremendous growth and support over the last year, and has been able to successfully carry out the mission of providing an array of free and high-quality youth enrichment programs to thousands of children who live in the City of Buffalo and neighboring communities. I am hopeful that the great citizens of Buffalo and WNY will be able come Downtown for a very safe and festive New Year’s Eve Ball Drop Celebration and join our exciting efforts to raise funds for an additional van that will be coming from West Herr and be utilized to deliver even more programs, goods, and services to the youth we serve during the school year and summercamp season.”

In celebration of the 34th anniversary of the Buffalo NYE Ball Drop, Strictly Hip will be rocking the Roswell Park Comprehensive Cancer Center’s Entertainment Stage. Roswell Park is the Illumination Stage Sponsor. Since 1995, The Strictly Hip has been evangelists, spreading the good word of The Hip’s music far and wide. Taking an academic and studious approach to performing the music of Canada’s most popular band, The Strictly Hip are not just another ‘impersonator’ tribute band. These talented Western New York musicians present the music of The Tragically Hip with reverence, respect, and accuracy. Originally conceived in 1995 in St. Catharines, Ontario, The Strictly Hip is now based in Buffalo and performs for The Hip’s rabid American fan base. Will Holton, a smooth and savvy saxophonist with an international reputation on the jazz scene, will also be back by popular demand.

The presentation of the “Countdown to 2022” HD telecast will be presented by WKBW Channel 7, a cosponsor of the Ball Drop events since the first one in 1988 – when 97 Rock offered it as a gift to the city of Buffalo. D.J. Jickster from 97 Rock will co-host the event with 7 Eyewitness News Morning Hosts Ed Drantch and Katie Morse, as well as AM Buffalo Host Melanie Camp, with Meteorologist Andy Parker’s 7 First Alert Forecast for the night. The exclusive 7 Eyewitness News Broadcast will feature an array of entertainment, highlight the Police Athletic League of Buffalo, as well as sponsors. Be sure to watch WKBW 7-ABC Live and on the 7WKBW Streaming app at 11pm on New Year’s Eve! And, to see some of the Best “Buffalo Strong” stories of 2021, join WKBW at 10pm on the 7WKBW Streaming app.

Marc Jaromin, Vice President and General Manager of WKBW-TV 7 Eyewitness News, stated, “All of us at WKBW are proud to once again be bringing this wonderful celebration to all of Western New York. If you can’t be here in the Square with us, you can still celebrate with friends and family at home. If you can be here to celebrate the ball drop, dress warm, wear a mask and be ready to send your new year’s wishes home.”

Skylighters of WNY will shoot the fireworks show and choreograph it to classic rock and seasonal music favorites. In an effort to provide reliable rides to and from the Buffalo Ball Drop, UBER is on board this year to help holiday revelers get to and from the event easier than ever. A Ridesharing Zone will be set up on Pearl Street, between Huron and Chippewa. Free parking is available at nearby Buffalo Civic Auto Ramps – Mohawk Ramp and Fernbach Ramp – courtesy of Mayor Byron W. Brown, The Buffalo Board of Parking and Buffalo Civic Auto Ramps. For directions to ramps, go to bcarparking.com. All Metro Bus and rail schedules can be found at http://metro.nfta.com/.

Hayley Prim, Public Affairs Manager for Uber in New York stated, “Transportation should never be a barrier for youth who live in the City of Buffalo and need to access safe youth enrichment programs that are operated for free by the Police Athletic League of Buffalo during the school year and summer. UBER is proud to support the City of Buffalo’s 34th Annual New Year’s Eve Ball Drop and PAL’s efforts to raise proceeds between now and the new year to purchase an additional PAL Van that will help deliver youth sports programs, goods, and services to kids and teens in the City of Buffalo and neighboring communities! We are committed to ensuring that PAL youth can continue to receive access to after-school enrichment programs, goods, and services that are provided by PAL. We also look forward to a continued partnership with the City of Buffalo to ensure Buffalo residents have access to reliable transportation options and flexible earnings opportunities.”

A “test drop” of the Ball will be held at 535 Washington Street, in front of the Electric Tower on Tuesday, December 28th at 10 am, when crews hoist the specially designed ball to the top of the tower, testing the hundreds of special lights and timing the descent.