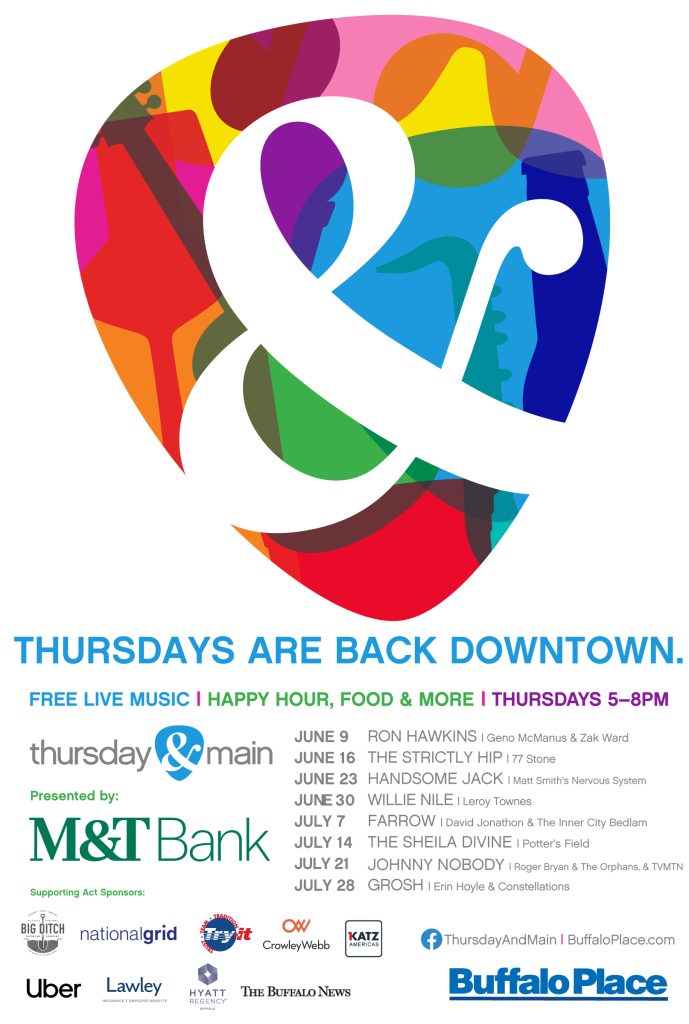 Thursday & Main: Thursdays are Back Downtown!

Buffalo Place will produce the free outdoor summer series, Thursday & Main, weekly from June 9th through July 28th in Downtown Buffalo at Fountain Plaza. Thursday & Main is presented by M&T Bank. The series continues to pay homage to the venerable Buffalo Place-produced summer tradition, Thursday at the Square. The free and open-to-the-public happy hour, presented on Thursday evenings in the heart of Downtown Buffalo at Fountain Plaza (Main at Chippewa Streets), continues the mission of Thursday at the Square: creating awareness and spin-off business for Downtown restaurants, bars, and retailers.

Thirty-five years ago, in 1987, Fountain Plaza hosted the first Thursday at the Park season, produced and managed by Buffalo Place. One year later in 1988, crowds for the happy hour became too large for the space. The series was shifted to Lafayette Square and Thursday at the Square was born. Fountain Plaza is a beautiful public space in Downtown and provides a picture-perfect setting for this summer’s Thursday & Main series.

To kick off the 2022 season presented by M&T Bank, Buffalo Place is pleased to welcome Ron Hawkins of Canadian alt-rock superstar band, Lowest of the Low. Hawkins holds a special place in Thursday at the Square history, performing with Lowest of the Low several times, including the summers of 1993 and 2005. In 2011, Hawkins and crew inaugurated the official move of Thursday at the Square from Lafayette Square to the Buffalo waterfront. Hawkins most recently performed during the 2019 Thursday & Main season at Fountain Plaza.

The Thursday prior to the Independence Day holiday weekend, June 30th, Thursday & Main is pleased to welcome Buffalo-born singer-songwriter, Willie Nile. Nile has toured across the country with The Who, and sung with Bruce Springsteen & The E Street Band. He is known and loved for his electrifying live performances.

Buffalo Place is delighted to welcome The Sheila Divine to Fountain Plaza on July 14th. Veterans of the Lafayette Square stage, their catalog of performances at Thursday at the Square include support for Moist in 2000, headlining in 2001 with Crash Test Dummies as their opening band, and supporting Tokyo Police Club during the first year of Thursday at the Square along the Buffalo waterfront. The Boston-based rock group boasts an eighties post-punk feel, noted for their loud/soft music dynamic and Aaron Perrino’s soaring vocals. The band has a large, die-hard fan base in what is often called “the three B’s”: Boston, Buffalo, and Belgium.

July 21st will be a special evening, “Harvest SUMmer Jam,” featuring artists from the former Buffalo indie record label, Harvest Sum Records. One of Buffalo’s finest independent record labels, Harvest Sum was led by a team of musicians and recording engineers, who released a variety of eclectic and regionally acclaimed albums. Headlining the evening will be Buffalo indie music scene veterans, Johnny Nobody. Johnny Nobody are masterful shape-shifters, seamlessly transitioning between barroom blues rock riffage, gritty psychedelia, and power pop.

The 2022 season will also feature new and returning Buffalo-based favorites, including masters of the music of The Tragically Hip, The Strictly Hip; fresh from their recent European tour, and garage rock heroes, Handsome Jack; rock ‘n soul masters of cathartic and infectious melody, Farrow; and GROSH, a high energy rock band with a visceral, heavy, and inspiring sound.