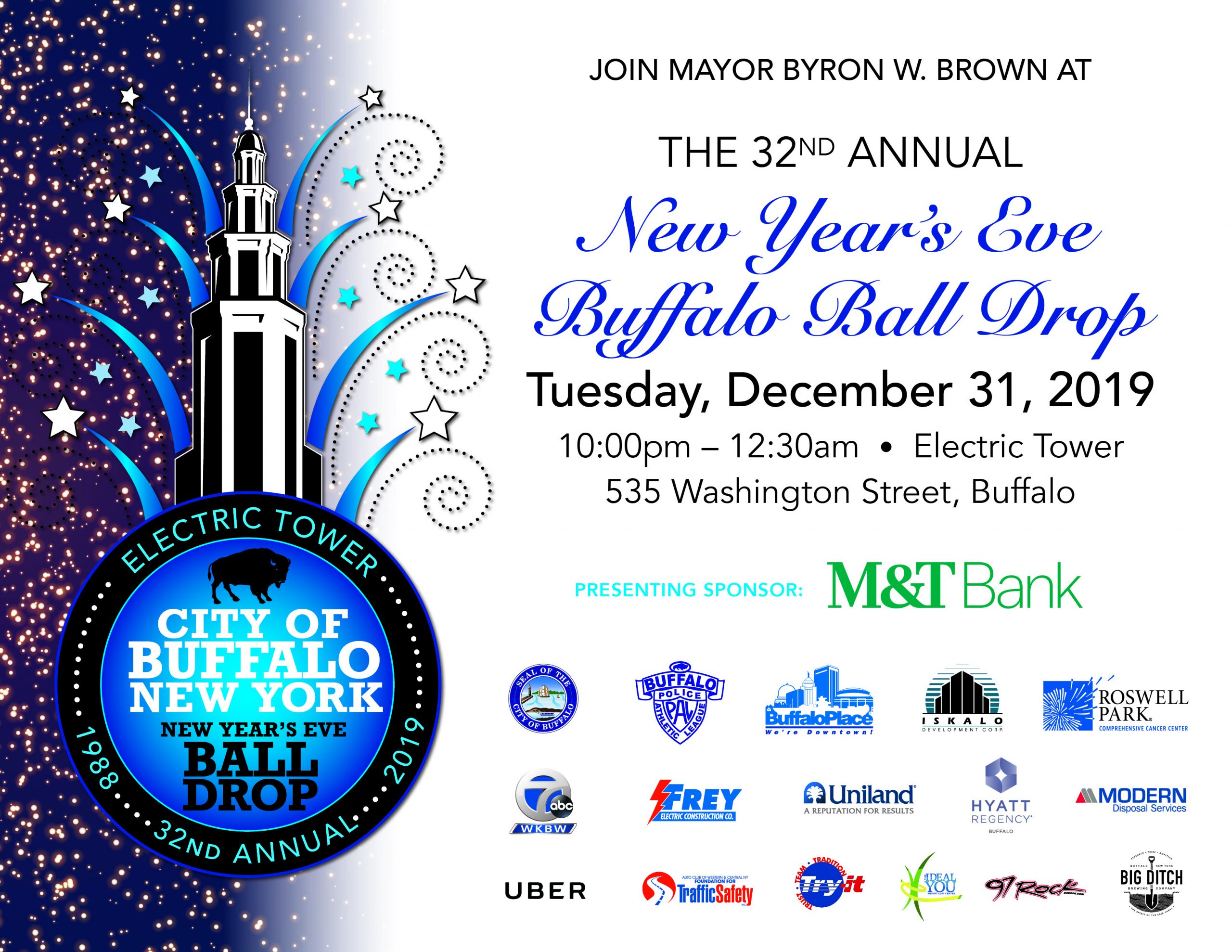 “With 2019 coming to a close, I extend my best wishes to City residents, business owners and visitors, and invite everyone to ring in 2020 with us at the 32nd annual Buffalo Ball Drop and Fireworks event,” said Mayor Brown. “As PAL Chair, I recognize the importance of PAL to our City and I encourage New Year’s Eve revelers to continue to support this valuable organization which provides recreation, education, and cultural opportunities for our youth. I’m grateful to the Buffalo Police and Fire Departments, the City’s Department of Public Works and Division of Parking, for their continued dedication to the New Year’s Eve Ball Drop in Buffalo, making sure it is safe and festive for all. I also thank our exceptional sponsor organizations. Their commitment to our youth and to our City fill us with a great sense of pride as we continue to work together to build an inclusive, equitable and vibrant city of opportunity.”

“The ball will drop again this year at the Electric Tower in celebration of another year of growth in downtown Buffalo, and fireworks will herald the progress we seek to achieve in the year to come. At M&T Bank, we’re proud to be a part of this celebration, and even more proud to be part of the renaissance in downtown Buffalo,” said C. Michael Zabel, M&T Bank Group Vice President, Corporate Communications.

“Buffalo Place Inc. and our Board of Directors are pleased to partner again with Mayor Byron W. Brown, the Buffalo Police Athletic League, WKBW-TV, and Iskalo Development on the 32nd Annual Buffalo Ball Drop and Fireworks event,” said Michael T. Schmand, Executive Director of Buffalo Place Inc. “Thanks to our Presenting Sponsor, M&T Bank, this signature New Year’s celebration will be a fantastic kick-off to 2020 in the heart of Downtown Buffalo.

Nekia Kemp, PAL Director, stated, “I hope that the residents of Buffalo and Western New York are excited about joining us in Roosevelt Square for the ultimate countdown to the New Year! This has been a tremendous year of growth and opportunity for the Police Athletic League of Buffalo, Inc. and we look forward to thanking our supporters by welcoming them to the 32nd Annual NYE Ball Drop!”

Once again, the New Year’s ball will descend from atop Iskalo Development’s historic Electric Tower, located in the heart of Buffalo’s Theatre District.

“Iskalo Development is pleased to host the 32nd consecutive Ball Drop at the historic Electric Tower and we greatly look forward to this year’s event to not only ring in a new year but also a new decade,” stated Paul B. Iskalo, Founder and CEO of Iskalo Development Corp. “This annual gathering of thousands of residents and visitors is truly a celebration of our great city and a wonderful reminder of what a great city it is.”

In celebration of its 32nd anniversary, the Buffalo Ball Drop will feature performances by Tommy Z and the All Star Band. Tommy Z is a contemporary blues guitarist/singer/songwriter/producer who has been described as a “blues treasure” by legendary 97 Rock/WBFO DJ Jim Santella (WBFO), and “one of WNY’s best kept secrets” by Sarah French, Blues Matters Magazine. He has been recognized with numerous awards over the years, including being voted Top Blues Vocalist in Western New York, Top Blues Guitarist, his groups have won the Top Blues/Crossover Blues
Band categories, and was honored with the Muddy Waters Award for “Artist of the Year” by the Blues Society of WNY in 2004. In 2007, Tommy was inducted into the Buffalo Music Hall of Fame, recognizing him alongside some of the best talent to ever come out of WNY.

Will Holton, a smooth and savvy saxophonist with an international reputation on the jazz scene, will also be back by popular demand. The show kicks off at 10:00 p.m. and concludes with the Buffalo Ball Drop and Fireworks at midnight.

Live coverage of the “Buffalo Ball Drop & Fireworks” will begin with “Eyewitness News at 11pm, followed by the television special “Countdown to 2020” that will be done in synch with “Dick Clark’s New Year’s Rockin’ Eve with Ryan Seacrest 2020” on ABC-TV. The presentation of the “Countdown to 2020” HD telecast will be presented by WKBW Channel 7, a co-sponsor of the Ball Drop events since the first one in 1988 – when 97 Rock offered it as a gift to the city of Buffalo. D.J. Jickster from 97 Rock will co-host the event with The Eyewitness News Team of Anchors
Keith Radford and Ashley Rowe, as well as reporter Hannah Buehler, with Meteorologist Andy Parker’s 7 First Alert Forecast for the night. Skylighters of WNY will shoot the fireworks show – presented by the Roswell Park Comprehensive Cancer Center – and choreograph it to classic rock and seasonal music favorites.

Marc Jaromin, WKBW-TV Vice President and General Manager, stated, “WKBW is once again proud to ring in the new year with our “Countdown to 2020” Buffalo Ball Drop and Fireworks program. Whether you join us live in Roosevelt Plaza, on television, or our streaming channels we promise another special celebration of an exciting Buffalo holiday tradition.”

In an effort to provide reliable rides to and from the Buffalo Ball Drop, Uber is on board this year to help holiday revelers get to and from the event easier than ever. For those at the event, a Ridesharing Zone will be set up on Pearl Street, between Huron and Chippewa. Free parking is available at nearby Buffalo Civic Auto Ramps – Fernbach Ramp and Turner Ramp – courtesy of Mayor Byron W. Brown, The Buffalo Board of Parking and Buffalo Civic Auto Ramps. For directions to ramps, go to bcarparking.com. All Metro Bus and rail schedules can be found at http://metro.nfta.com/.

A “test drop” of the Ball will be held at 535 Washington Street, in front of the Electric Tower on Friday, December 27th at 10 am, when crews hoist the specially designed ball to the top of the tower, testing the hundreds of special lights and timing the descent. 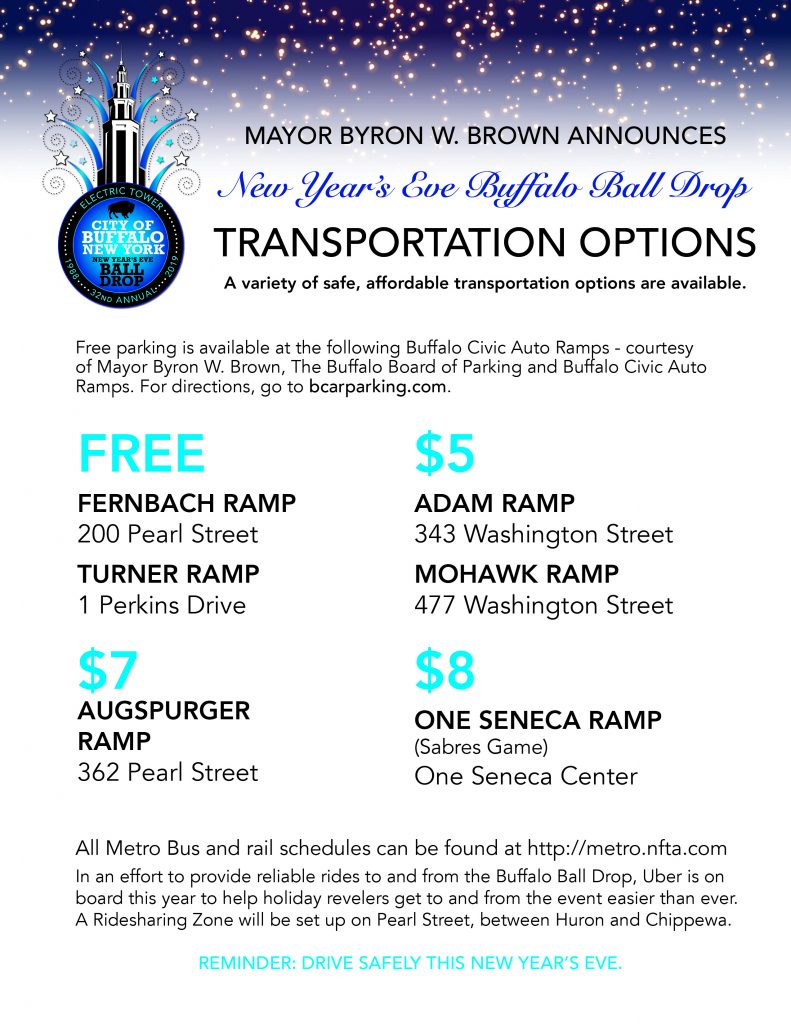