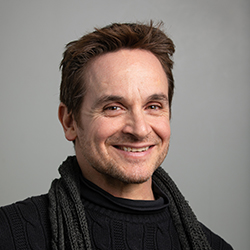 “‘A Fact Was No Less a Fact Because It Was Told By a Crazy Person’: Popular Responses to 19th Century Asylums.”

Join us at Hallwalls Contemporary Arts Center for the ninth year of Faculty Fellows talks on Friday, September 13th at 4p! This lecture series brings current UB humanities research out into the community – with complimentary wine and hors d’oeuvres. The talk is free and open-to-the-public.

Michael is the Director of the Center for Disability Studies and an Associate Professor in the Department of History. He has authored or edited many books, articles, and book chapters, including most recently, The Oxford Handbook of Disability History co-edited with Catherine Kudlick and Kim Nielsen. He is currently working on a book entitled, ‘A Secret Worth Knowing’: Living Mad Lives in the Shadow of the Asylum. For more information, click here.