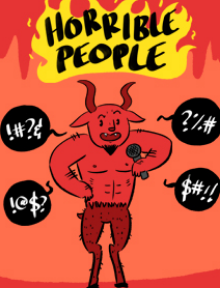 Thursday, April 7th at 8pm, join Helium Comedy Club for Horrible People. This comedy show proves that there’s humor to be mined from the least humorous of intentions, and the best stories often arise from the worst decisions. Listen to true tales, told by the sinners themselves, about times they’ve left the world worse than they found it. General admission is $15 for this 18+ show. For more information, or to purchase tickets, click here.