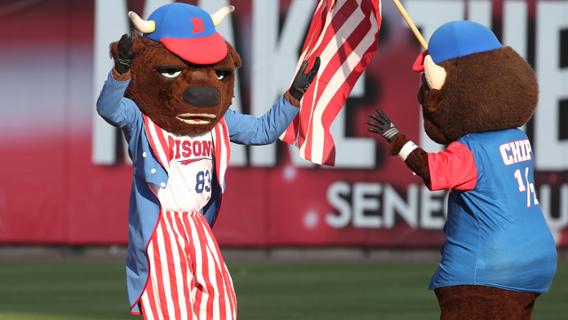 Join the Buffalo Bisons on Wedensday, July 3rd  for the milestone 25th Annual KeyBank Independence Eve Celebration with the Buffalo Philharmonic Orchestra and the Largest Fireworks Show of the Season as the Bisons host the Lehigh Valley IronPigs.

Since the event began in 1995, nearly a half a million fans have joined their fellow citizens at Sahlen Field to celebrate our nation’s birthday and pay tribute to everything that makes the USA the greatest country in the world! It’s a can’t miss event that’s fun for the whole family!

The KeyBank Independence Eve Celebration features the best that America has to offer. Our national pastime played out between two great rivals. Then after the game, sit back and enjoy a great post game concert from the Buffalo Philharmonic Orchestra with the return of The Maestro, Paul Ferington! Of course, no KeyBankIndependence Eve concert would be complete without several numbers to honor our brave servicemen and servicewomen.

After a feast for the ears, get your eyes ready to be amazed. As the concert ends, the Largest Fireworks Show of the Season begins.