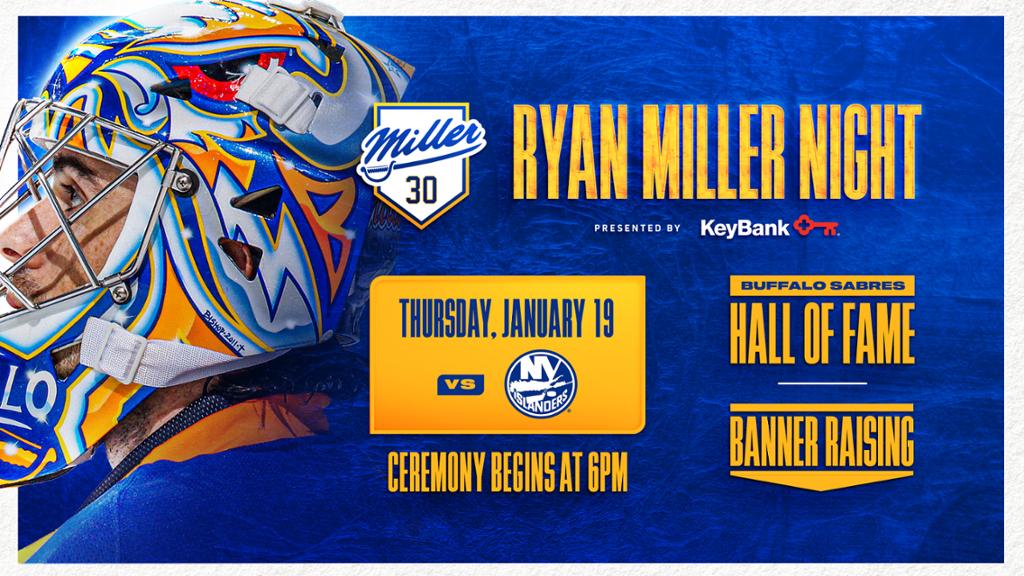 On Thursday, January 19th, Ryan Miller Night presented by KeyBank will honor the career of the iconic Buffalo Sabres goaltender. Miller will be inducted into the team’s Hall of Fame and will have his No. 30 raised to the rafters in a banner ceremony that will begin at 6 p.m. Doors to KeyBank Center will open at 4:30 p.m. that evening and fans are encouraged to be in their seats by 5:50 p.m. so that they do not miss any of the festivities. Faceoff is now set for 7:30 p.m. Tickets are still available with a limited inventory starting at just $30.

Upon entry, all fans will receive a replica banner. The ceremony will be carried in full on the MSG broadcast starting at 6pm. Following warmups on January 19th, the Sabres will take on the New York Islanders. During the game, the team will wear a special jersey patch to honor Miller’s banner night. The jerseys will then be up for auction online.

A special Miller logo has also been designed by Pegula Sports and Entertainment for use throughout the night and in promotional assets leading up to the game. The custom logo pays tribute to the “Miller Time” script that the Sabres netminder sported on the back of many of his goalie masks during his playing career.

Miller, who spent parts of 11 season with Buffalo from 2002 until 2014, is the franchise’s leader in games played by a goaltender (540), wins (284), and saves (14,847). His 28 shutouts as a Sabre are second only to Hall-of-Fame netminder Dominik Hasek and his .916 save percentage ranks third. He finished his career with more wins (391) than any other American-born goaltender in NHL history. Miller will become the 43rd person to be inducted into the Buffalo Sabres Hall of Fame and the eighth Sabres player to have his number retired. Click here for details.