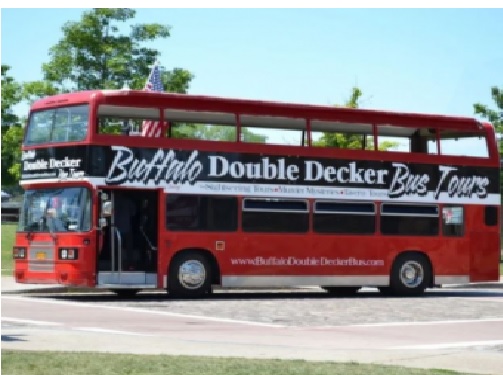 This summer, you will have the opportunity to retrace those eight days in September 1901, from the time when President McKinley was shot at the Pan American Exposition through the swearing in of one of our nation’s most consequential presidents-Theodore Roosevelt.

In partnership with Buffalo Double Decker Bus Tours, the TR Inaugural Site has created a motor tour of Buffalo that will weave its way through the streets of North Buffalo, the Elmwood Village, and downtown Buffalo, while sharing with riders the story of one of the most pivotal moments in our nation’s history. You’ll learn about the anarchist who mortally wounded McKinley in the Temple of Music on the Pan-Am grounds and see the actual spot where the shots were fired. You’ll discover why McKinley was operated on at the Pan-Am Hospital and who was supposed to perform the surgery and didn’t. You’ll see where the private home stood in which McKinley stayed during his ill-fated convalescence. You’ll follow the path Vice President Roosevelt took from the Terrace Street train station to the Ansley Wilcox home at 641 Delaware Avenue where the oath of office was administered on Saturday afternoon, September 14.