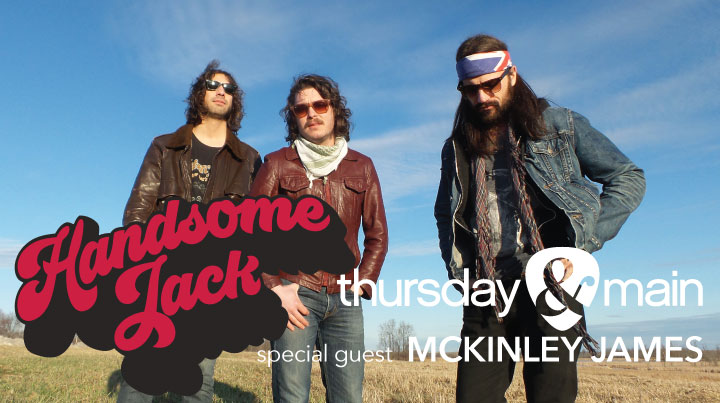 Thursday, July 15th will feature Handsome Jack with special guest McKinley James. Hailing from Lockport, New York, Handsome Jack plays a powerful and emotional fusion of boogie soul rock n roll that has earned the admiration of fellow rock travelers such as Chris Robinson (CRB, Black Crowes), Zachary Gabbard (Buffalo Killers), and Ben McLeod of All Them Witches, who produced their new record. On “Everything’s Gonna Be Alright” the trio digs deeper into its soulful influences, brilliantly bringing back to life the classic sounds of Chicago, Memphis and Muscle Shoals, all rolled into one timeless record of American rock music for a new generation. Handsome Jack is Jamison Passuite (guitar/vocals), Joey Verdonselli (bass/vocals), and Bennie Hayes (drums/vocals).

McKinley James is a 18 year-old Rock & Roll guitarist/singer from Rochester. His father, drummer Jason Smay (Los Straitjackets, JD McPherson Band) helped raise McKinley in a very musical household. He started on the Hammond organ at 7 but discovered his passion for guitar at 10. His influences range from Hollywood Fats, Dave Alvin and Garland Green. He started performing in Rochester blues and jazz clubs at age 13 and has performed with Chris Duarte, The Nighthawks, Joe Beard, and JD McPherson. McKinley is also the face of the latest Eric Church album campaign, having starred in his music videos, and also appears on the album cover for Church’s latest record, Mr. Misunderstood.