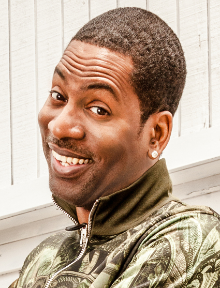 A comedian, actor, writer, and producer, Tony Rock is a man of many talents. The younger brother of Chris Rock, Tony is a bona fide comedy star in his own right, with credits ranging from the box office hit, “Think Like a Man” to the BET favorite, “Real Husbands of Hollywood,” to his own Comedy Central Presents special. Rock is currently the host of BET’s “Apollo Live” and “All Def Comedy Live.”