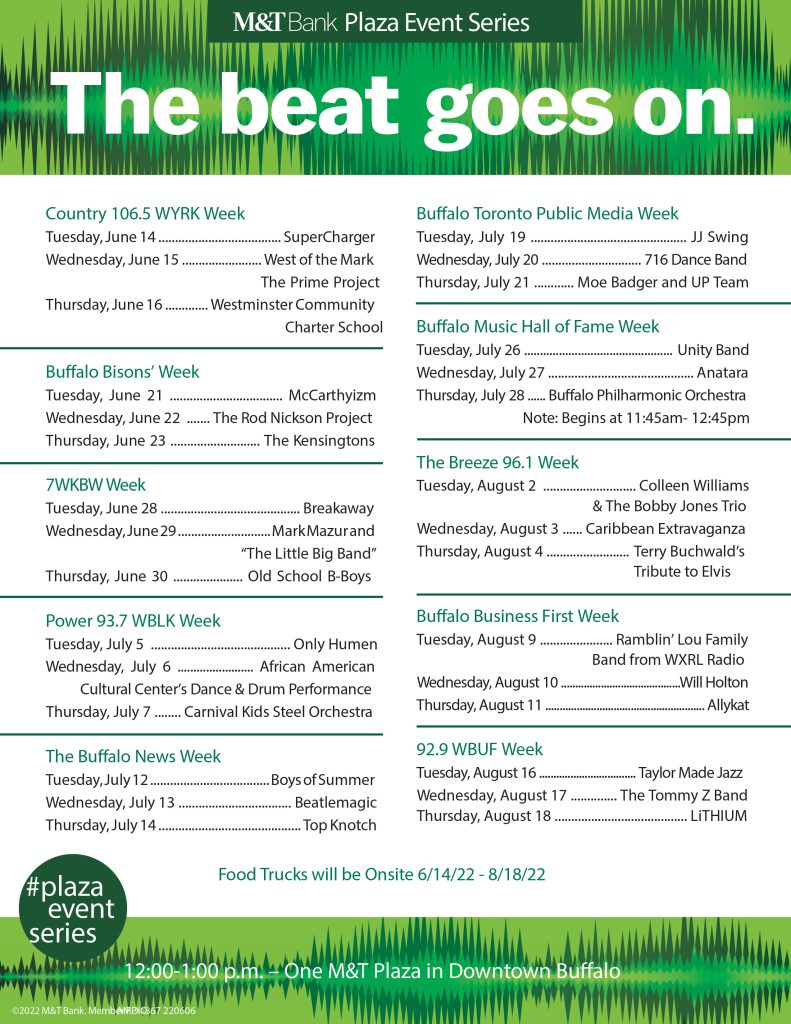 M&T Bank announced the return of the Plaza Event Series for its 52nd season in Downtown Buffalo. From June 14 through August 18, the Buffalo-based bank will welcome the community for lunchtime concerts outside its headquarters, One M&T Plaza, every Tuesday, Wednesday, and Thursday. The free concert series, the longest running of its kind, will feature local pop, jazz, rock, blues, comedy and dance artists with daily attendance by local food trucks.

“Since the Plaza Event Series was launched in 1969, it has always sought to fulfill a purpose beyond entertainment. Of course, we want people to have fun at the concerts, but it’s also about bringing neighbors together to connect, build relationships and foster a deeper sense of community,” said M&T Bank Western New York Regional President Eric Feldstein. “We are overjoyed to bring back 10 weeks of noontime concerts, with each performance serving as an opportunity for our community to come together to nurture the bonds that connect us as neighbors and celebrate the strength of the City of Buffalo.”

New this year, M&T plans to host “pop-up shops” that will feature local businesses during the lunch-hour concerts. This new effort will provide a platform for artists and small businesses to showcase their work and connect with new audiences and customers in the heart of Downtown Buffalo.

The 2022 lineup of performers welcomes back crowd favorites, such as Old School B-Boys, Terry Buchwald’s Tribute to Elvis, Beatlemagic, the Buffalo Philharmonic Orchestra and many others that have been performing on the Plaza Event Series stage for years. This season will also bring the debuts of first-time performers, such as Top Knotch, 716 Dance Band and Moe Badger and UP Team.

In addition to the concerts, the Plaza Event Series will feature local food trucks throughout the summer, including:

“One M&T Plaza has always been a fantastic gathering place for people who work, live and visit Downtown Buffalo to spend their lunch hour surrounded by the community and immersed in local music,” said Lynn Waclawek, M&T Bank employee experience program manager. “With its eclectic mix of performers, brand new pop-up shops and rotating lineup of food trucks, this year’s Plaza Event Series will offer memorable experiences that bring smiles to our faces and uplift our spirits.”

M&T is encouraging community members who attend the concerts to share photos, videos and other fun moments on social media using #PlazaEventSeries.

Beyond the Plaza Event Series, M&T Bank is also supporting live music and contributing to the vibrancy of the downtown community through its presenting sponsorship of the Thursday & Main concert series, which starts this month and runs through July with free concerts every Thursday at 5 p.m. M&T’s investment in the series builds on its long history as a patron and advocate for the arts in Western New York.

The full lineup of performers for the 2022 Plaza Event Series is listed below:

About M&T: M&T Bank Corporation is a financial holding company headquartered in Buffalo, New York. M&T’s principal banking subsidiary, M&T Bank, provides banking products and services in 12 states across the eastern U.S. from Maine to Virginia and Washington, D.C. Trust-related services are provided in select markets in the U.S. and abroad by M&T’s Wilmington Trust-affiliated companies and by M&T Bank. For more information on M&T Bank, visit www.mtb.com.